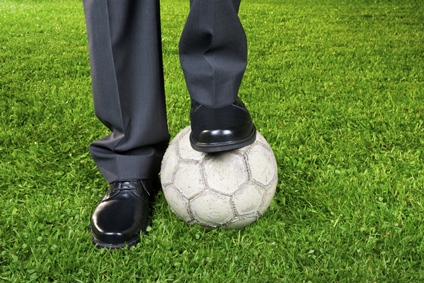 While the athletes have been battling it out on the field — sweating, crying, and even biting — brands have used the World Cup event to connect with a global fan base and even try out a few “real-time” marketing updates. We asked a few ad execs which brand “won” the World Cup prior to this weekend’s final matchup. Here’s what they had to say.

So far the brand Brazil is the big winner. Despite all the negative PR in the run up, and now with their BIG lose, we’ve seen a proud country being the perfect host. It’s hard to say which brand has achieved the most impact without access to data, but to me one of the most interesting advertisers was Beats by Dre stereo headphones. Not only was their guerrilla ad a great way to be associated with FIFA without being an official sponsor, but also creatively, they’ve shown how brands are crossing boundaries. Beats used the same stars and scenery as Nike and Adidas, but the ad felt more edgy and contemporary. Above all it was a real step up from the simple (but highly effective and memorable) product placement on the heads of famous athletes we saw in London 2012.

To a hard core footy fan (ahem), both Nike and Adidas really worked hard in the run-up with their official adverts — really short films that are directly connected to the passion of the beautiful game. Both are amazing pieces of globally-relevant content and both put their stars front and center. Interestingly, I thought Adidas’ connects more with players, Nike’s more with the fans. Nike probably did a better job of using social to drive awareness to it, the story and video is a bit more shareable and entertaining — and they have twice the views compared to Adidas. Among my footballer friends, Amsterdam agency ACHTUNG! won the internet. Right after the Suarez biting incident, they quickly published a Pac-man like game called Biteman, where the disembodied head of Suarez gobbles up a bunch of Giorgio Chiellini heads as he tries to evade the red flags of four referee ghosts. Brilliant, and a fast reaction to a worldwide event. It’s pretty clear who lost. Kia’s car commercials were all over the U.S. broadcasts of the game, but they were tone-deaf and managed to offend pretty much everyone. They looked really out of place, like a U.S. football beer commercial. Hyundai’s commercial about 9 months later probably led to some amusing family discussions, since a lot of young kids were watching the games in the U.S. as well.

I haven’t seen too much that stands out for me in the World Cup this year. In years gone by we’ve had to rely on brands to deliver quality branded football experiences on mobile, but for the first time FIFA actually released an app that was worthy of installing on your phone. That said, there was one brand that caught my attention this world cup: Beats by Dre. The brand produced a thematic 5-minute trip around the world to showcase pre-match music rituals known as “The Game Before The Game.” It features a swath of big name football stars as well as a few surprises like LeBron James and Serena Williams. So far it’s been viewed 22 million times on Beat’s official YouTube channel and unsurprisingly was paired with a Jay Z remixed “Jungle” anthem, downloaded wherever good music is sold online. Aside from the stellar production quality, there are two other standout results. First, it’s Beats by Dre beating Nike and Adidas at their own game; if they are the kings of sports marketing, a young prince has come of age. Secondly, the star of the short film is the Brazilian Neymar Jr., whose dad delivers inspirational pep talks willing him ‘to not hold back’ and ‘to wear God’s armor’. Unfortunately, and somewhat ironically, Neymar Jr. broke his back in the Quarterfinals and was stretchered off. With Neymar out, Brazil went on to be thumped 7-1 in the semi-final — their worst loss in 94 years. That’s football. And there’ll be another story in there for the kings of sports marketing to work their magic.

While Nike arguably has had some of the best spots, with ‘Winner Stays’ airing pre-World Cup and ‘Risk Everything’ releasing closer to the tournament, Adidas has done a great job of maintaining a large share of the conversation. Their official sponsorship of the World Cup is a great help, and they’ve done well on social media, with the Brazuca Ball Twitter account racking up nearly 3.2 million followers and some high-profile retweets. The launch of their new Battle Pack gear has also been well executed, with excellent signage, online ads, and plenty of marquee athletes wearing the new boots. Some honorable mentions go to McDonald’s, whose trick shot ad generated a lot of online buzz before the games, and ESPN, who has done an excellent job with its television coverage, most notably driving massive amounts of traffic to the WatchESPN app that has allowed mobile viewing of all the games. Very handy when you’re sitting in the office.

Both brands (Nike and Adidas) have pinned their audience insight well and should achieve some level of success against those audiences, but Nike is definitely playing the chasing brand role, subtly challenging soccer players to ‘risk everything’ by not choosing the known brand (and not so subtly in ‘Clones,’ where they take a shot at Adidas reputation for sponsoring robotic players and teams, while Nike chooses to align with creative, youthful, flashy players). Adidas, on the other hand, has promoted its World Cup omnipresence, especially in the ‘Brazuca’ ad specifically for the official ball. Adidas has certain advantages in gaining impact, notably that in addition to having two teams in the final four, they also outfit the referees, and are the official ball — a ball that not coincidentally is similar in design to the FIFA World Cup 2014 logo. That resemblance will be easily picked up in retail locations for ball shoppers looking for the ‘match ball.’ Adidas also put together a very opportunistic ad for the Germany vs. Brazil semi-final match (‘History Calls’). While both brands used top international soccer names and faces in their creative work, many of Nike’s endorsed celebrity players — most notably Ronaldo, Rooney, Iniesta, and Neymar Jr. — either exited the tournament very early, or will not be anywhere near the final, while Adidas still has Messi, Ozil, and Schweinsteiger in play. It serves to endorse Adidas’ understanding that, at this level, soccer is a game meant to be taken seriously, not as a flashy moment.

My .02 would be that Adidas has truly owned the lion’s share of online conversation, due largely in part to their team’s preparation, resources, and already well-engaged global audience. Adidas has been ‘all in’ on social media and creating engaging content for their audience for years prior to this. And, as media has reported, the Adidas social team spent the better part of a year developing their strategy, amassing imagery and resources, and planning all of the potential outcomes and content plays against each of those. That has allowed them to respond quickly in ‘real-time’ with well-thought-out tweets.

There are some unexpected winners from the World Cup. Yes, Adidas, Nike, McDonald’s and the other sponsors have done well. But the unexpected winners in America are the growing soccer industry: Major League Soccer, AYSO youth soccer, and the companies who directly benefit from selling more jerseys, shorts, shin guards, shoes and balls. Soccer has been growing in popularity, and the phenomenal amount of buzz that came from this event will have repercussions for years to come. Offices around the country stopped working as people flocked to watch the key games online and together on TVs. The surge of interest, especially with the U.S.’s surprisingly good performance, brought a whole new level of interest, credibility, and excitement to the sport. The publicly displayed interest from famous Americans such as Pitbull, Jennifer Lopez, and Kobe further fanned the flames and legitimized American fan interest.

Which Brand Won the World Cup? by Charles