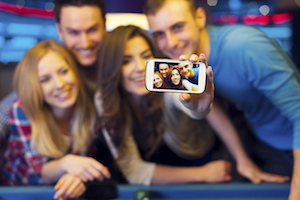 Selfies tagged with #NoFilter tend to get more likes than those that are not, so it makes sense that any Instagram user looking for a little boost in internet-fame would slap #NoFilter on their photos.

But what if the picture just looks a lot better with Valencia or X-Pro II applied to it? Well, then I guess you’ve got no choice other than a little white lie. I mean it’s not like it’s going to hurt anyone — it’s just Instagram, after all. And no one’s even going to know, right?

Actually, there’s a way to figure out whether someone’s using a filter. While not visible in the normal Instagram interface, the API lists the native filters each photo is treated with.

So I decided to see how many people are indulging in these white lies — #NoFilterFakers, if you will. Instagram photos that, even though they’re tagged with #NoFilter, they do actually have a filter applied. I created a little website called NoFilterFakers.com to feature these images, and took a look at some of the overarching trends behind fake #NoFilter posts.

Curious about who’s behind the fake #NoFilter posts, what they use it for, and when they tend to use it? Keep on reading. 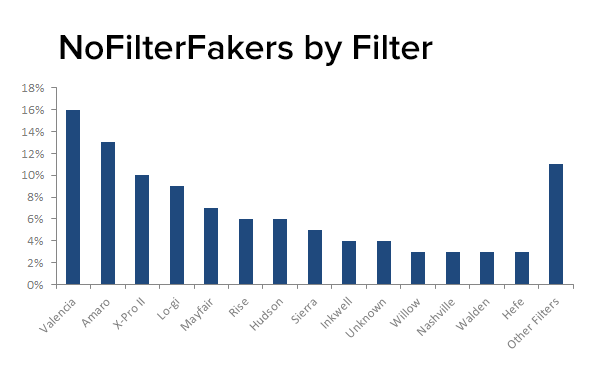 It turns out that the among the most popular filters used by #NoFilterFakers are Valencia and X-Pro II, the two filters mentioned in the song #Selfie as applying a “tanned” look to selfies. Amaro, with its super-classy looking vignette edges and cool tones also appears in the top 3.

#NoFilterFakers Tend to Be Women 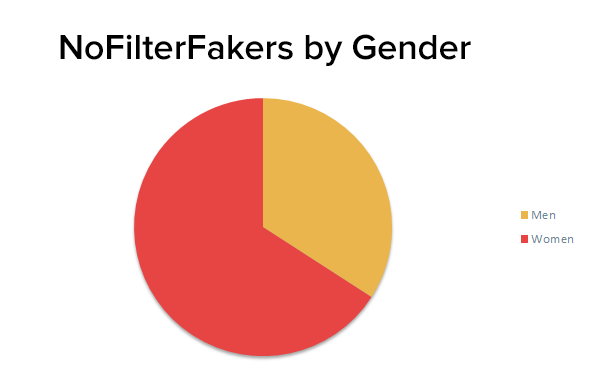 Using first name recognition, I was able to sample the users guilty of #NoFilterFaking and determine their gender — 66% of #NoFilterFakers are women. 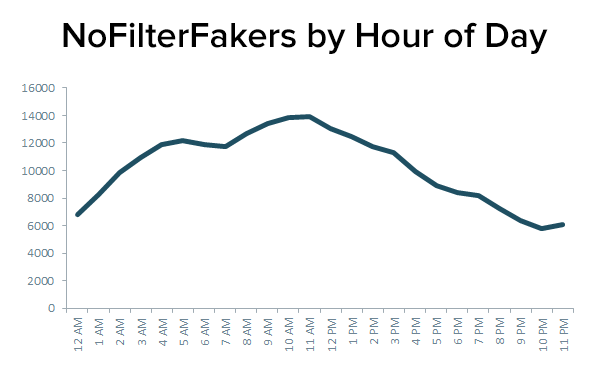 The hours of day graph above is presented in Pacific Time and we see it peak around 11 a.m. — maybe when people are taking lots of pictures of their brunch.

Monday and Tuesday Tend to See the Most #NoFilterFaking 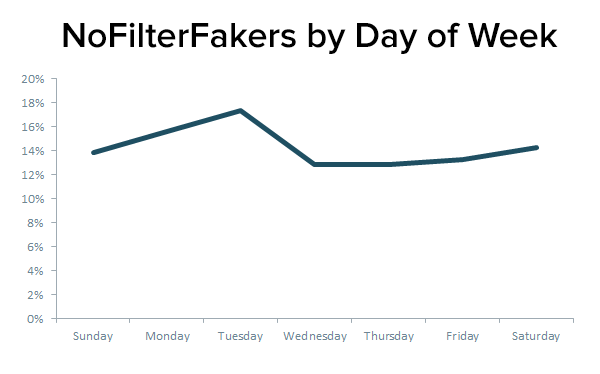 When I looked at which days of the week most #NoFilterFaker images are posted, I was surprised. I expected that the weekends would be the highest, with attention-seeking club goers and beach loungers Insta-lying about their pictures to goose their imaginary internet points (likes and followers).

That assumption was way off — turns out Monday and Tuesday are the peak days. I guess that means that a lot of #NoFilterFaking activity might be marketing-types just doing their jobs.

What do you think of this data? Have you ever used #NoFilter when your photo had a filter?