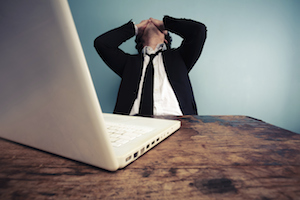 Personalization has proven to be an important part of developing consumer trust, but what happens if you take it too far?

We’ve talked about which forms provide the best possibility for conversions, when to let buyers know you’re collecting their information, and just how much of that information to use. It may seem like overkill but the simple reason we talk about this is, when you cross that line — that invisible line that’s different for every single buyer — you damage your business.

And a few weeks ago, Myspace ventured over near that over-personalization line — and some would say they crossed it.

When Myspace decided to send out personalized emails featuring ten-year-old photos that past users had uploaded to the site, they probably thought it was funny. I probably would have laughed or maybe just shrugged it off. But not everyone found it amusing — in fact, many called the tactic blackmail.

Blackmail may be going a bit too far, but the fact of the matter is that Myspace’s email came across like, “Hey, look. We have all these old and embarrassing pictures of you. What are you gonna do about it?”

And, to be honest, even if everyone they sent these emails to logged back in just to delete the incriminating photos, Myspace would experience a huge jump in active users, even if only for a day.

The Basis for Complaint

What was so bad about Myspace sending out these old photos to people? Sure, we see where the whole blackmail thing might be a problem, but why does this bother people so much?

The big issue is that consumers are reminded yet again just how much information companies collect. Even after the profile is abandoned or deleted, Myspace still has access to the content uploaded after all these years. Since companies now perform thorough internet checks before making a hire, plenty of people have something to be worried about.

It’s not just the abuse of data, though. It’s the simple feeling of violation, of feeling watched or controlled. This is why companies must consider their marketing campaigns carefully. Reminding consumers that you hold that much information about them probably won’t make them like you.

There is a great chance the bad publicity surrounding Myspace’s choice to “blackmail” past users actually helped the social networking site. After all, I never received any old pictures in my email, and now I kind of feel left out. The hype surrounding the marketing ploy has me wondering just what I posted there ten years ago.

Is that enough to send me running to log in? Not yet … but no guarantees I won’t cave later. 😉

Have you been “blackmailed” by Myspace yet? Are you curious enough to go check out your photos before they have a chance to send you the horrifying highlights? Maybe you’re of the majority who feel Myspace overplayed their hand when reminding consumers just how much information they have about us.

Whatever your thoughts, leave us a comment. We’d love to hear from you.

Embarrassing or Adorable? MySpace Emails Users About Their Decade-Old Photos by Charles