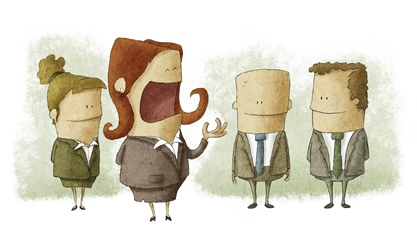 Someone once told me I interrupt a lot.

I was offended at first. “I’m just trying to show that I’m listening and on board with what you’re saying.” It’d be weird to just be silent while they talked. That comes off as disinterested, right?

Fast-forward eight years, and I’m glad I took that feedback to heart. I’ve stopped interrupting people, and instead use other cues to show I am interested and listening. Now, I find people talk a lot longer than they used to — it’s remarkable what they’ll say when they’re not afraid of getting cut off — and interrupting has actually become one of my biggest pet peeves.

One place this has helped me a lot is in networking — the more I can learn about a new person to whom I’ve been introduced, the better. Unfortunately, there’s a ton of other conversational faux pas besides interrupting that can make it hard to establish a good connection with people. Let’s examine some of those, and learn the impact it has on people in one-on-one or group conversations.

If you’re not sure what a close talker is, watch this Seinfeld clip (skip to second 0:16):

Most people have a personal space bubble that, if you pop it, sends up alarm signals. It puts people on the defensive and causes discomfort — not a great environment for a conversation. Respect people’s personal space — reaching in for a handshake only — and you’ll get conversations off to a good start.

It’s a good conversational technique to ask someone about themselves, but it can quickly turn into an interrogation if the questions remain directed at just one person for too long. Find opportunities to relate to the person’s responses, instead of continuing to ask question after question after question. When you add your own experiences to the dialogue, it turns from an interview to a conversation.

Bonus: That common ground you establish while networking can lead to fruitful business opportunities. Remember, people do business with people they like and trust.

Staring Off Into Space

You know when you’re in a conversation and it’s kind of boring? Or you see someone else in the room you want to talk to? Or you have to pee and are scanning for a restroom? It’s easy to let your eyes start drifting around the room, causing you to break eye contact with the person or people you’re speaking with.

That sends a signal that you’ve moved on from the conversation, and aren’t interested in what they have to say. And even if that’s true, it’s no way to establish connections. Worse, it just makes the other person feel crappy.

If you have to break off the conversation for one reason or another, use your words. Find a natural break in the dialogue, explain you have to excuse yourself for X, Y, or Z, and use it as an opportunity for your “ask” — whether that’s a business card, an interview request, or just a hearty handshake farewell.

Have you ever heard that advice that when you’re networking, “Just go up and join a group and see what they’re talking about!”

It’s fine advice, but it can really backfire if you’re not prepared to enter the conversation gracefully. If you sidle up to a group conversation (I could throw in another Seinfeld clip here), be prepared to take in the topic of conversation and confident you can think on your feet enough to contribute to it. Otherwise, you risk being the weird person who sidled up to a conversation, said absolutely nothing, and made everyone else feel weird about your unexplained presence.

Okay, I couldn’t help it, here’s another Seinfeld clip, this time about sidling.

On the other end of the spectrum lies the person who just can’t shut up. Again, conversations require two or more people to carry on — give other people a chance to talk. Otherwise, you might find yourself on the receiving end of the “staring off into space” move.

Often, parroters may think they’re being encouraging and positive by reflecting back what their conversation partner has said, but too much of it can leave a conversation at a stalemate. Conversations are two-way streets — be sure you’re bringing something to the table to move it along. Being the only one talking is just exhausting.

Among friends, sure, bringing up the latest piece of controversial news is okay — it’s a safe space, and you’ve aired strong opinions before. But networking events are not the place for it. While I’ve met a few people that have never shied away from airing controversial opinions no matter what/where/when, most people around them become instantly frozen with discomfort. The conversation makes people go from acting normal to scouting for the nearest exit.

Depending on the group you’re talking to, light controversy might be alright — for instance, if you’re at an event with young people in tech, you’re probably not going to offend anyone by bringing up twerking. But you’ve got to tread lightly here, and know your audience if you’re willing to take the risk.

On a similar note, not everything that’s up for debate needs a concrete answer. If topics come up that have some gray area, embrace that gray area and the variety of opinions that come with it. Diverse opinions are perfect for fostering interesting, memorable conversation, but those who try too hard to assert their opinion as the opinion will quickly bring a friendly debate to a close.

What conversational habits turn you off? Share them in the comments.