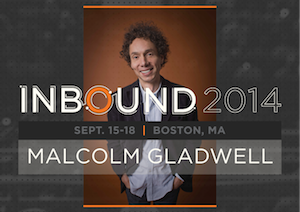 Today, we are excited to announce that Malcolm Gladwell will be joining the keynote speaker lineup at the INBOUND 2014 conference this September. Gladwell is the author of five New York Times bestsellers including Blink and The Tipping Point, a leading staff writer for The New Yorker since 1996, and was named one of the top 100 most influential people in the world by TIME.

But, Gladwell wasn’t always a revered author, writer, thought leader, or influencer. He initially planned to go into advertising after school, until every ad agency he applied to rejected his application. Gladwell’s expertise lies in the intersection of data and the society we live in today; he is passionate about human behavior. His position at The New Yorker created an outlet for him to explore social science and he quickly became known for his unconventional ideas on why humans think and act the way we do. Fifteen years and a handful of international bestselling works later, Gladwell’s work challenges us to rethink what shapes the world we live in.

At INBOUND, Gladwell will share insights and discoveries from his latest book, David and Goliath: Underdogs, Misfits, and the Art of Battling Giants, which was released this past October. In an interview with Inc on his most recent work, Gladwell explains that, in business, underdog brands today can triumph over large corporations; it all comes down to effort. “I may not be able to outspend you, but I can outwork you,” he says.

We are thrilled to bring Gladwell’s innovating thinking to over 7,500 INBOUND attendees, and compliment an all-star lineup of keynotes including Martha Stewart and Simon Sinek. If you’re a Gladwell aficionado, INBOUND fanatic, or just a curious marketer always on the hunt for inspiration, we hope you’ll join us in welcoming our keynote with some social buzz:

Want to learn more about the INBOUND conference? Visit www.inbound.com to discover what speakers, sessions, and events we’re packing into four days for over 7,500 attendees.