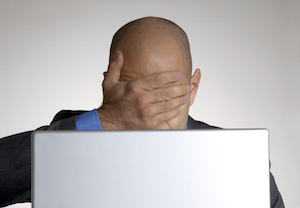 Just because you have a kitchen doesn’t mean you’re in the running for the next episode of Chopped. I mean, sure I have a kitchen too, but my list of specialties includes cereal, macaroni and cheese, and toast that’s often burnt.

Well, the same can be said for Facebook: Just because your business has a Page doesn’t mean that you’re using it right. Even with 10 years of Facebook behind us, we’re all guilty of committing our fair share of social oversights and slip-ups. It happens to the best of us.

However, before we all start thinking about what Facebook’s next 10 years will bring about, let’s be sure that we’ve got a handle on what Zuck’s given us to work with so far. Below are the eight most common mistakes brands are making on Facebook.

Everyone has a few little peculiarities and mannerisms that set them apart from the next guy. Certain sarcasm or unparalleled modesty will come across in your communications and serve as a defining aspect of your identity.

The tone that your brand employs works in the same way, and each bit of language you put forth should be aligned with your overall messaging, objectives, and goals.

For example, what does the tone of this post from Philippine Airlines say to you?

If you answered: “What tone?” you read my mind.

There isn’t anything unique about this post. It’s vague and so overly simple that it could have been posted by almost any brand.

What brands are failing to understand is that the way a brand sounds and interacts will ultimately work to set a customer’s expectations for the rest of the interactions they have with your company. Point being, don’t try to squeeze yourself into a mold that just doesn’t fit, but instead, create your own identity. If you want to see some examples of brands with brilliant tone in their writing, check out this blog post.

With the introduction of short form social platforms like Snapchat and Vine, people have developed an insatiable appetite for snack-sized content. The brands that are dominating their industries have not only recognized this shift in consumer behavior, but they have in turn begun to adopt a more succinct approach to content creation. 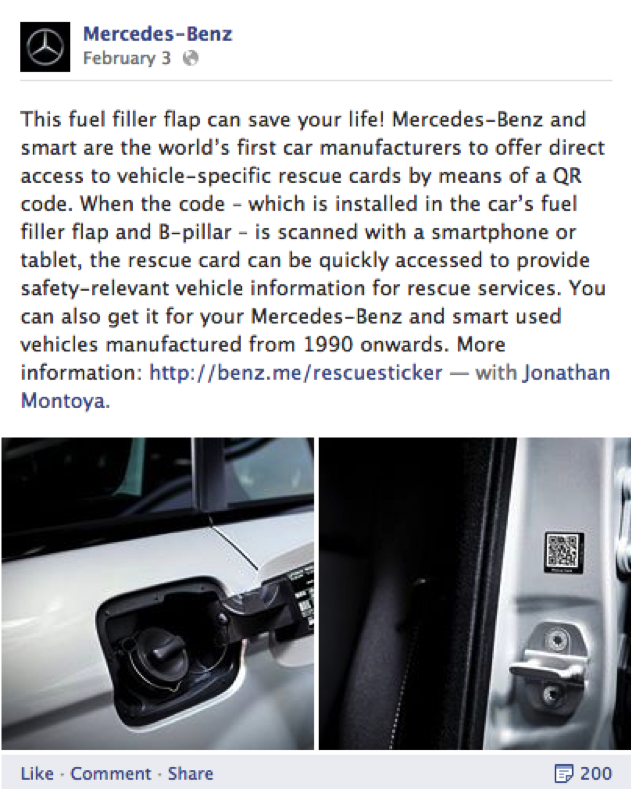 Just because Facebook budgets a bit more space for content than platforms like Twitter doesn’t mean that you need to fill it. This post, for example, would have been much more appealing and effective without the long text accompanying it. In fact, according to research by Buddy Media, posts with 80 characters or less in length have 27% higher engagement rates.

Believe it or not, nuggets of information can pique your audience’s interest more effectively than long-winded explanations. To put it quite simply: less is more.

The copy you put on Facebook should begin a dialogue, not just a one-way broadcast.

Your Facebook Page is no place for stale traditional marketing efforts focused on pushing out information that may or may not speak to the needs of your audience. Facebook is a modern marketing machine that runs best on quality content that is designed to feel more like an authentic exchange and less like a static offering.

After all, Facebook is a social network. It thrives off of native content that doesn’t just speak at customers, it speaks with them. For example, look at the way these two Budweiser posts performed: 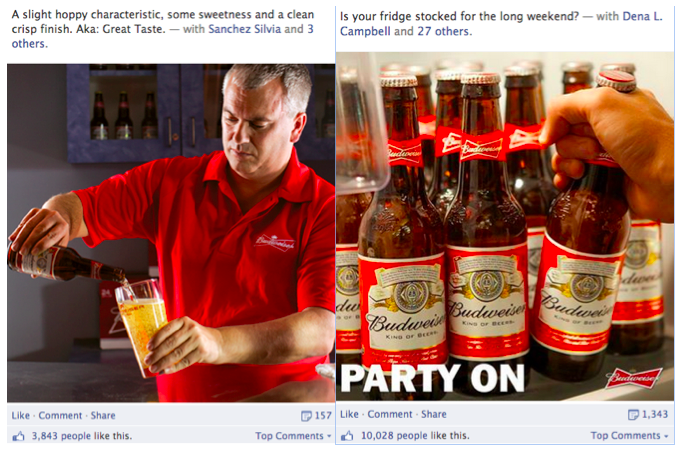 The post on the left that talks at the audience boasted far less Likes and shares than the post to the right, which probed the question, “Is your fridge stocked for the weekend?”

In order to land a sale, you must first build a relationship, which is why issuing content that engages your audience isn’t just recommended — it’s necessary.

Creating a strong, consistent brand image is one of the most substantial competitive advantages possible.

Take a look at what you’ve got hanging in your closet; it’s likely that at least a handful of your threads are branded. Whether it’s a Nike swoosh or a Polo pony, each and every time you wear that shirt, you’re functioning as a walking billboard for that brand. 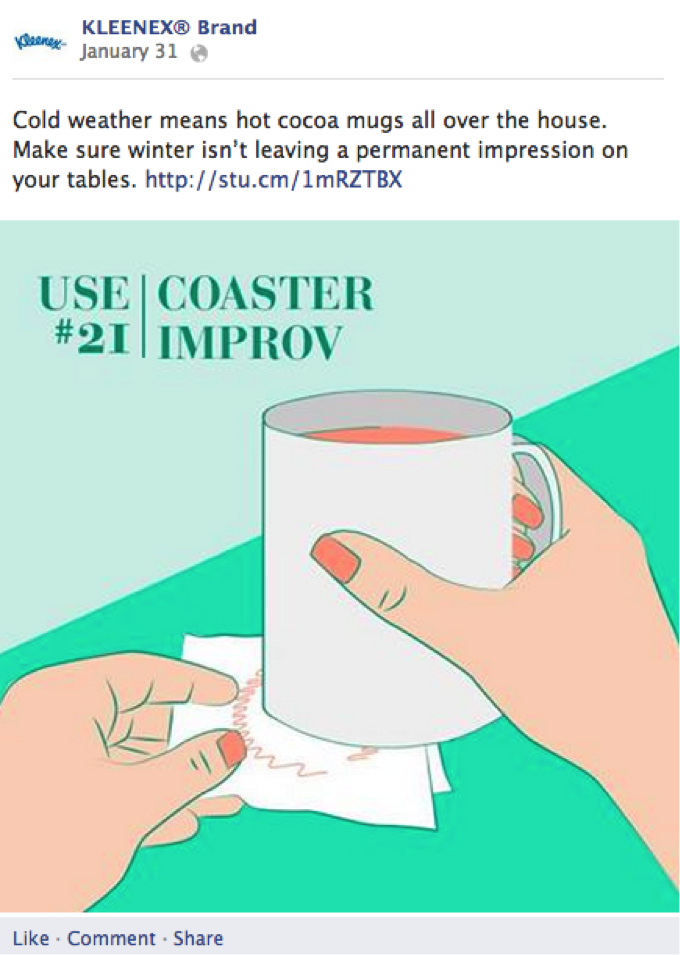 While we commend them for their cute and clever campaign, when a fan goes to share the image, there is nothing in on the image itself that signifies that it’s Kleenex’s.

Additionally, labeling your images will protect them from online theft or misuse. If another brand or person snags your imagery, a simple label has the ability to remind viewers who actually created the image.

In all seriousness, even people living under a rock can’t avoid the imminent onset of all things mobile. While the message may have become a bit repetitive, the solution is simple: Adapt or fall behind.

This particular post from the women’s clothing retailer, Zara, may first strike you as a clean, minimalist approach to Facebook marketing. However, we’re having a bit of trouble reading it on mobile. 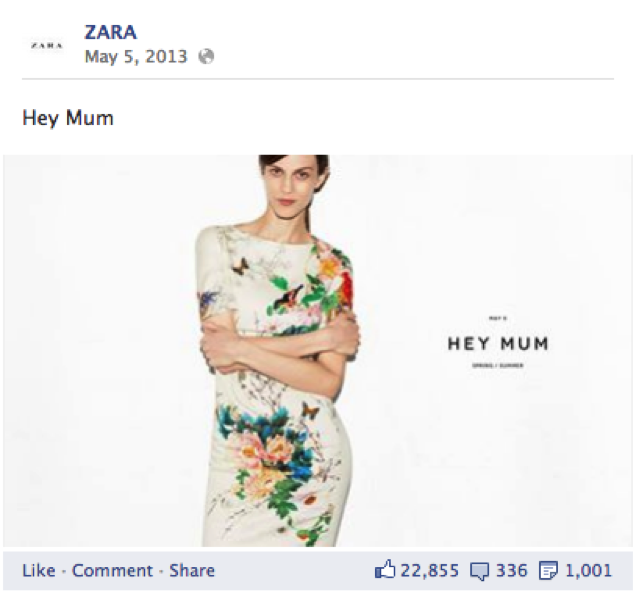 I pride myself in having 20/20 vision, but the indecipherable text above and below the “Hey Mum” seems smaller than even the teeniest line on an eye chart. Looks like we need to go back to the drawing board on this Facebook image, because if Zara’s message is lost on a desktop, it won’t stand a chance on a small-scale mobile device.

With 945 million of Facebook’s 1.23 billion monthly users accessing the site on mobile devices, if your content is anything less than mobile-friendly, it’s not going to make the cut.

It’s no secret that catching and maintaining the interest of Facebook users is a big ask. News Feeds are crowded, and noisy, making a Facebook post’s journey from production to consumption a chancy one.

While the best time to post on Facebook certainly varies depending on your industry, your specific product/service, and your audience’s demographics, there are considerations that you’ll want to keep in mind.

On Super Bowl Sunday, Heinz Ketchup released two different football-themed Facebook posts, one at the start of the game, and one at half-time: 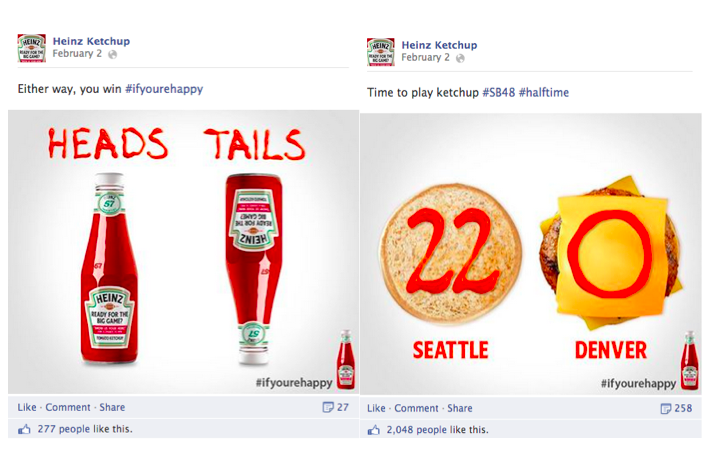 Note the discrepancy in Likes. While there are certainly outside factors playing into the varying number of Likes each post received, it’s safe to say that one of the reasons why the halftime post performed so well was due to timing.

At the start of the game everyone is glued to the television, but by halftime viewers break to replenish their snacks, get a refill, and of course, check Facebook.

By understanding how your audience behaves, you can then begin to position your posts for specific time frames that work best for them.

According to data by ClickSoftware, 13% of dissatisfied customers will tell more than 20 other people about their negative experience. But people still believe that ignoring complaints make them go away. Take the following posts on Subway’s Facebook Page, for example:

By leaving these customer complaints like these unacknowledged and unresolved, Subway leaves themselves open to further customer unhappiness. We’re living in a digital age where information is spreading faster than ever before. If a business thinks that they can simply sweep this type of dissatisfaction under the rug, they should prepared for potential backlash.

Rather than view customer service’s change of face as a burden, it is important for businesses to recognize that this type of social transparency can help them pinpoint problem areas and correct matters accordingly.

Have you heard the news about newsjacking? Newsjacking provides marketers with a unique opportunity to get their business noticed by capitalizing on a real-time cultural event. The thing is, for every newsjack that works, there’s a handful that miss the mark entirely. 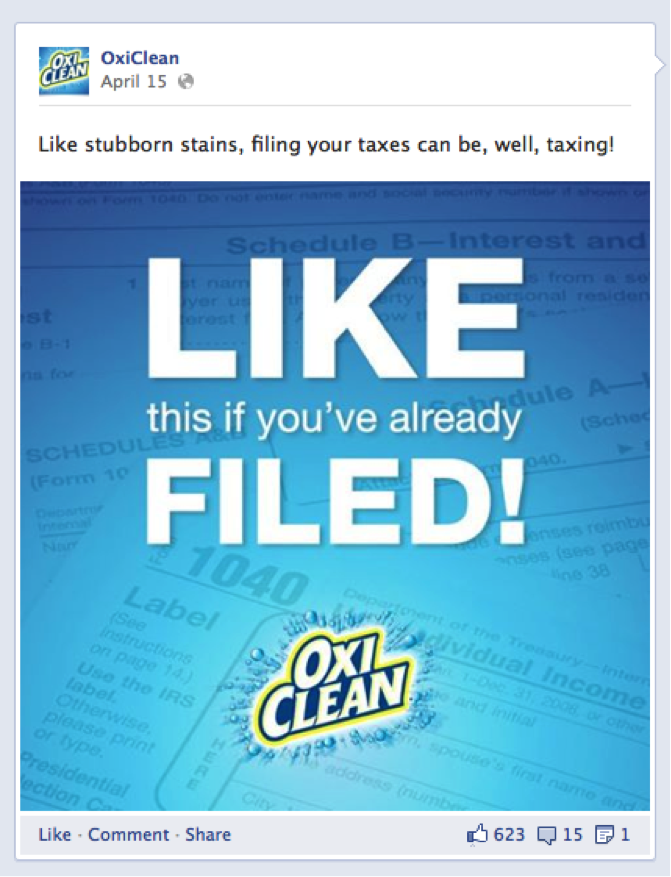 I mean, nothing says “go file those taxes” like a good old household cleaner, right?

It’s important to be picky when selecting a topic to newsjack — not any old event will do. Before you jump the gun, make sure the topic you are tying your brand to is relevant. Nobody likes a try hard.

And there you have it! Eight frowned-upon Facebook mistakes that are stifling your marketing initiatives. While you may be able to get away with mistakes like these on newer social networks, Facebook is something your audience expects you to have down by now. So next time you go to craft a post on Facebook, revisit this list. At the end of the day, avoiding these mistakes could be just what your business needs to differentiate yourself from the crowd.