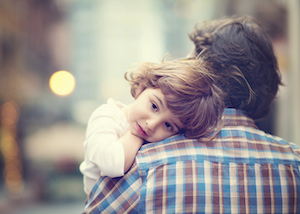 This is the image many brands and advertisers have been promoting for years. And while laughing at Dad’s expense can be a fun pastime for many families (especially mine), there isn’t enough creative that showcases dads who are strong, supportive, loving, and most importantly, present — the type of father many of us know. And it’s the type of dad that deserves more than a supporting role in today’s advertising.

Dove recognized this in 2013, releasing a series of ads featuring Dwyane Wade and Jay Bilas to promote its Dove Men+Care line. It also was the title sponsor of the Dad 2.0 Summit in 2013. Vice president of marketing for Unilever Skincare Robert Candelino stated at the summit that, “73% of men feel they are inadequately portrayed in advertising.”

This year, just in time for Father’s Day, Dove has launched a new campaign to specifically challenge the media image of dads and their role in their families. With the video, Dove released the findings of a study by Edelman Berland of 1,000 fathers between the ages of 25 and 54. It found that “Three-quarters of dads say they are responsible for their child’s emotional well-being, while only 20% of dads see this role reflected in media.”

The ad shows kids calling for their dads as they stumble through various life moments:

The campaign also calls for dads to submit their stories and images about the reality of being a father by using the hashtag #RealDadMoments on Twitter, Instagram, or Facebook.

If relevancy is worth anything to brands and agencies, then they need to reconsider the storyline for fathers, too. Luckily, Dove isn’t the only brand choosing to eschew the “bumbling dad” plot. Check out these 10 commercials that showcase dads as more than just the family clown.

The smallest gesture can make the biggest impact on a daughter.

Dads can’t teach you everything, but they can teach you that you can do anything.

Casting for “dad” can be tough. But being a dad isn’t an act.

Pride goes to a new level when you become a father.

Explaining changes in your family in simple ways can sometimes lead to an even bigger family.

Remember: Your dad is there from the beginning, witnessing every moment.

Dads can handle it all — with a little help from technology.

A father’s need to protect his daughter doesn’t diminish with age.

Kids can get themselves into some pretty dangerous situations. It’s a good thing dad is watching.

Sometimes, your best pal is also your dad.

Which of these ads is your favorite?

10 Commercials That Challenge the "Doofus Dad" Stereotype by Charles